The Readium Foundation was created in March 2013 as an independent non-profit corporation. The Open Source Foundation aims to develop technology for expediting the adoption of ePUB3 and the Open Web Platform by the Digital Publishing Industry. It strives to deliver leading-edge functionality that is fully specified, free, open, and interoperable.

Readium aims at networking and coordinating between other similar open-source efforts. Among them, the European Digital Reading Lab (EDRLab) is the most important participant of the Readium project. In addition, EDRLab is also the driving force behind the LCP (Licensed Content Protection) system, which is a significant new development of Readium.

The Readium project aims to develop a robust, high-performance, cross-platform, and standards-compliant ePUB reading system, which can be used by the native applications of both mobiles, tablets as well as desktop systems. This engine can be deployed in browsers and embedded into browser apps such as Google Chrome extension or into native applications.

The Readium SDK is an ePUB reader SDK (software development kit) very much similar to that of Adobe’s Reader Mobile SDK (RMSDK) in terms of its capability and scope. The Readium SDK performs simplistic test applications for the different operating systems, whether it be Android, iOS, or even OS X, apart from supporting encryption-based modules. Although it can work along with various web browsers, the Readium SDK prioritizes the development of the WebKit over everything else.

Related Read: How to Choose the Best SDK for your Custom eBook Platform

What are the Goals of the Readium Project?

The Readium project’s primary goals were to:

How to Automate PDF to ePub3 Conversion

The wide popularity of Readium is mainly due to some of the integral qualities of this ePUB reader. Following are some of the general features of Readium:

The relationship between the parts of the architecture of Readium is illustrated in the diagram below: 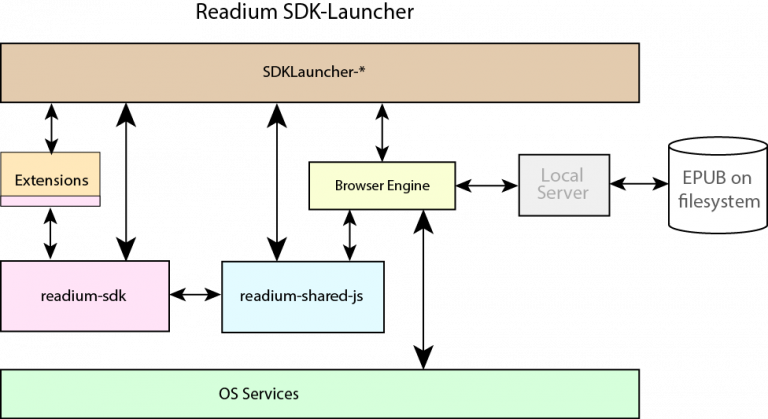 This is the platform-independent Core C++ code that manages the ePUB package, metadata, and various functions such as the navigation and fetching of resources.

A layer of pure JavaScript, it offers interfaces and services between the application layer, the Core and the web-browser engine. You can use it across both the ReadiumJS sub-projects and SDK-based applications.

In addition to managing the messaging between the native layers, the layer also provides better management of views.

These platform-specific applications facilitate the testing of the rest of the SDK and provide a rudimentary demonstration of how to integrate the native applications within the SDK. They are made deliberately limited and crude, as Readium does not want to compete with its own members.

Also Read: The Best eBook Platforms for the Post-Readium Era

When Google announced its decision to disable the use of Readium, the need for an alternate solution to substitute Readium had arisen. Kitaboo is an e-publishing platform that can serve as a viable alternative to Readium. It is designed for publishers to create and deliver eBooks. Kitaboo eBook platform and Kitaboo SDK find favor with many leading publishers. The Kitaboo SDK framework can be integrated on any platform – Android, iOS, Windows and HTML. It lets you customize and integrate all its functionalities into your system of choice, helping you create a robust ePUB reading system for mobile and desktop devices.

If you want to leverage Kitaboo SDK to create a robust reader, please get in touch with us.

DISCOVER HOW AN INTERACTIVE EBOOK PUBLISHING PLATFORM CAN HELP YOU

Vishal is the Senior Vice President and Head - Cloud Platforms & Technology at HurixDigital. He leads the product development group and technology solutions.

Get the latest posts delivered right to your email.

We use cookies to give you the best online experience. We store no personal details, you can change the settings anytime. Privacy policyOkayNo